I’ve written a great deal about bad guys and how to create them and use them, but one problem I see from other writers is defining the villain as a super menace then turning him into a bungling idiot so the good guy can keep escaping.

In the novel I just finished, the hired killer after the hero and his friends is billed as a professional killer with a military background who has killed dozens of people leaving no real trace.   In his first appearance, this assassin is in the audience of the man who is supposed to be his first victim in the story.

The hero is a professional magician who “reads” the minds of the audience.  The assassin volunteers to be mind-read then tries and fails to kill the magician with a small pocket knife no self-respecting professional killer would use while a spotlight is on him in front of hundreds of witnesses.

Later, the assassin has trouble killing an dottering, elderly couple, and the only way he can get to other victims who know he is after them is for them to be too stupid to live.

Needless to say, this inept bad guy sucked the energy right out of the plot.

Don’t tell the reader that your bad guy is a super menace then have him show himself as worse than an amateur because you need the tension to keep the story moving forward.  Really put yourself in the bad guy’s shoes.  If he has a military background and training as an assassin, let him use it.

Instead, let him fail through luck on the part of the good guys or a supposed victim’s unexpected skill or knowledge.

Artificial suspense by telling rather than showing a bad guy’s skills is no suspense at all.
Posted by Marilynn Byerly at 12:16 PM 0 comments

UNLOCKING THE FIVE SENSES IN YOUR WRITING:

WHERE TO FIND FREE IMAGES ONLINE:

THE SECRET TO WRITING A SERIES:

MAKING THE READER CARE ABOUT THE HERO:

IS THAT SUBPLOT HELPING OR HURTING YOUR STORY:

QUESTION:  My critique partners say most of my characters sound alike in dialogue.  Help!

Cast all your characters with actors you are very familiar with so you can hear their voices when you write dialogue.  Unless you have a tin ear for speech, you will rarely have two characters sound alike.

When you pick your actor, consider what part of the country or country of origin your character is from.  Make sure their voices reflect that. You don’t want an actor from DOWNTON ABBEY to play a cop from Philly.

Writing dialogue as what it sounds like rather than the proper spelling is frowned upon these day unless used very sparingly so don’t go overboard with phonetic spelling ("Yo' ole father doan' know yit what he's a-gwyne to do. Sometimes he spec he'll go 'way, en den agin he spec he'll stay.”--from HUCKLEBERRY FINN) or apostrophes to show words that are slurred together. (“If’n you think, I’s stupid.  You be wrong!”)

If you aren’t that familiar with a region’s speech, be very careful how you write it because it’s easy to stereotype or get it wrong.  For example, most of us in the Southern US don’t use “y’all” that often, and when we do in very informal speech, it’s plural meaning more than one “you.”   (Jennifer turned to her cousins and smiled sweetly, “Y’all come home with me and have some supper.”  Her voice turned frosty as she glared at her brother.  “You don’t come, period.”)

Another good test is one line of dialogue that isn’t attributed to who is saying it.  If a reader can tell who is saying it by how and what is said, then you’ve succeeded at your task.
Posted by Marilynn Byerly at 12:50 PM 0 comments

WHY YOUR AWESOME MAIN CHARACTER IS BORING PEOPLE:

THE PROS AND CONS OF SELF-PUBLISHING:

DEEPEN THE SETTING AND WORLDBUILDING:

HOW TO UPDATE AN AMAZON WIDGET:

TRADITIONAL OR SELF-PUB?  HOW TO DECIDE:

GIVING YOUR NOVEL A KILLER CONCEPT:

WHAT THE READER KNOWS THROUGH VIEWPOINT AND WHAT HE SHOULD KNOW:

Sometimes, you can start out your story with a main character who has unpleasant elements to their personality, but a character must be likable or, at the very least, relatable for the reader. Here are ways to show more than the prickly outer elements of her personality.

If you give the main character a worthy goal in the first pages of the novel, then you give yourself time to make a seemingly unlikable character grow on the reader.

By worthy, I mean something the reader will want that character to succeed at–- rescuing children, helping a nice person find happiness, etc. Even if the character starts out doing it for a base reason like money, the reader will still want him to succeed.

Simple things can help make a character start to grow on the reader. Pets are always a good option. Either he has one, or he can't resist the heroine's kitten, or something like that. Having him interact positively with a child is also a good likability quickie.

Recently, I read a short story in which the heroine breaks into the apartment of a possible villain-- a hard-ass security agent. A teddy bear is sitting on his couch, and he later admits it belongs to his nephew. With that simple stroke, the author made a seemingly unlikable bad guy a much nicer person.

Giving a character a vulnerability that the reader can relate to is also a good likability quickie. It can be as simple as a chick lit heroine having a bad hair day and the boss from heck, or the bad ass hero getting into a small plane and freaking out because he finds a snake.

Eventually, more likable elements of that character's personality will have to be shown, though, so the bad parts of her personality don't overwhelm the reader.

In some genre fiction like thrillers, the immediate likability quotient doesn't have to be high at the beginning, particularly if the character is strong and effective in what he needs to do.

But in a romance, the hero or heroine should be likable from the very beginning. The other main character can become likable as the book progresses, but he should not start as totally horrible. Some character traits like cruelty can't be forgiven or changed because, in real life, they never are.
Posted by Marilynn Byerly at 1:51 PM 0 comments

FIGURING OUT YOUR CHARACTER’S GOALS AND MOTIVES:

WAYS NOT TO BEGIN YOUR BOOK:

CLARIFYING THE STAKES OF THE STORY:

CREATING MEANINGFUL SETTINGS IN YOUR NOVEL:

GOVERNMENT SPYING AND LAW ENFORCEMENT AGENCIES, WHO DOES WHAT:

CREATING A HIGH CONCEPT FOR YOUR NOVEL:

RESOURCES FOR MEDICAL INFO, ETC., FOR YOUR WRITING:

HOW TO AVOID TOO-DUMB-TO-LIVE CHARACTER CHOICES:

BRUSH UP YOUR GRAMMAR, ITALIZATION:

GETTING THE PLOT AND THE SEX SCENES TO SYNC:

KEEPING A SECRET AND BACKSTORY:

STRAIGHTENING UP YOUR VIEWPOINT:

Mystery, romantic suspense, and urban fantasy novels often start with a dead body, and the main character’s goal is to find out the who, what, when, where, and why of his death so she can solve the crime.

The first hook for the reader is curiosity about the victim and the crime as well as the main detective/character’s personality, etc.

Most readers will allow the writer time to set up the situation and to gather the first clues, but a certain point, the reader’s patience and interest will wear thin unless the writer gives the reader a reason to care about the victim.  Simply getting justice for the victim isn’t enough to keep most readers reading the whole novel.

The simplest way to make the reader care is to make the victim someone the reader would care about instantly -- a child, an innocent, a good person, or a person with a job that matters like being a school teacher, doctor, social worker, or an honest cop.

Even someone who was a jerk or bad person will matter if he died doing something decent, or he had survivors who care.  A weeping mother or wife who begs for justice is a strong motivator for the detective and the reader because they create an emotional stake in the person’s death.  If the detective must prove it was murder, not suicide, so the young widow with little kids will get death benefits, the solution will matter.

If nothing about the victim will give the detective or the reader any reason to care that he was murdered, then the detective must have another reason to solve the crime.  Perhaps, he will lose his job because his failure rate at solving crimes is so high, or he’s caught in a political situation where only solving this crime will save his career.  The victim could be one of a string of serial killings, but the killer has made several sloppy mistakes in this killing which could be his downfall so the detective is trying to stop other murders as well as solving this one.

A method used in TV shows like CSI or BONES is to make the good guys and their scientific methods as important as the crime’s solution.  We care about them more than the rotting corpse of the abusive pimp at the crime scene, and their lives are the soap opera that drives the emotional plot while the science drives the mystery plot.

Having the killer go after the detective or people he cares about is also a tried and true method to make the solution matter.

Whatever method you use, just remember that the main character’s goal in solving the crime must be a strong and worthy one, and the emotional reasons for the solution must matter to both the reader and the detective.
Posted by Marilynn Byerly at 1:46 PM 0 comments

FIGURING OUT THE CHARACTER ARC:

DON’T REFER TO YOUR CHARACTER BY TITLE:

BRAINSTORMING YOUR IDEAS TO CREATE A STORY:

A SCAM AGAINST SELF-PUBS USING THE DCMA NOTICE:

THE THREE TYPES OF BIOS EVERY PROFESSIONAL WRITER NEEDS:

HOW TO TELL WHEN YOU ARE TELLING, NOT SHOWING:

THE SEVEN KEY ELEMENTS TO PACING YOUR NOVEL:

GET  YOUR VIEWPOINT CHARACTER TALKING INTERNALLY:

READING IS THE TRAINING GROUND FOR WRITERS, (AMEN TO THAT!): 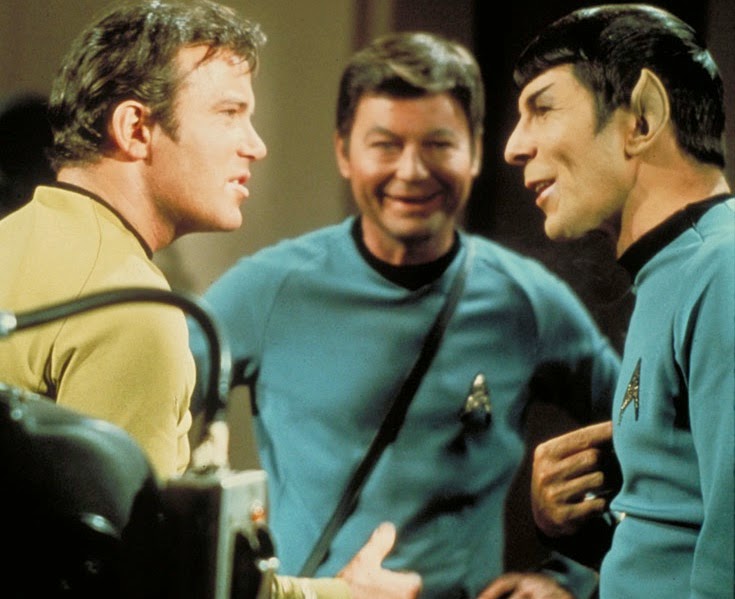 I first recognized the character trinity and its power in the original STAR TREK.

Kirk, Spock, and McCoy were an ideal heart, mind, and action trinity.  When a problem needed to be solved, Spock was the logical mind, McCoy the emotional heart, and Kirk took both and created the ideal action.

These characters can also be considered a thesis, antithesis, and synthesis.  Two opposite sides of a problem from Spock and McCoy, and Kirk pulling both together to find the solution.

Harry Potter, Hermione, and Ron are also a character trinity.

Three major characters like this can be a very powerful means of telling a story because they are not only working together but also working against each other.  They can even reflect the complex nature of the book’s world or the moral dilemma of the story.

A love triangle in a romance is almost never a character trinity because the conflict is about the relationships, not the way these characters react together in the real world.

Instead, use the character trinity in more world-based stories like fantasy, science fiction, or adventure novels.

If you decide to use a character trinity, your main character must always be the action taker or the synthesis.  The other two tend to be either passive or reactive which makes a very poor hero.

Marilynn Byerly’s writing passion is adventure stories in the past, present, and future. In her creations of adventurers, suspense, true love, and villains to vanquish, she also likes to add a dash of the unexpected.

"Affaire de Coeur" named her an outstanding achiever in romance, and her novels have won numerous awards including a Sapphire, the National Reader's Choice Award, and the Write Touch Award.